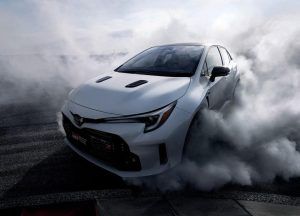 The Newest Member of the GR Family

Toyota’s commitment to a carbon neutral future is coming to fruition with the all-electric Toyota bZ4X SUV. This model is bold and modern, yet it brings a sense of familiarity. Designed to usher in a new era of vehicles, the bZ4X is more than just a means of transport. Consumers will rethink the way they look at vehicles, and the bZ4X specifically brings innovation that plays a role in everyday life.

bZ4X is the first Toyota vehicle to be launched under the Beyond Zero (bZ) series, with more bZ vehicles on the horizon intending to elevate the BEV segment for years to come.
The bZ4X joins an extensive lineup of Toyota electrified vehicles that account for 28% of Toyota Canada’s total sales volume last year. These include hydrogen fuel cell electrics, hybrids, plug-in hybrids and now battery electric vehicles. Toyota envisions a future in which carbon neutrality is achieved through a portfolio of products with advanced, alternative-fuel and zero-emission powertrain technologies.
Toyota plans to expand to around 70 electrified models globally by 2025. This future lineup will feature 15 dedicated BEVs, including seven carrying the bZ (Beyond Zero) brand moniker. This diverse portfolio of electrified products will help propel Toyota toward its goal of carbon neutrality by 2050. Globally, Toyota has put more than 20 million electrified models on the road – with a CO2 emissions reduction affect equivalent to the CO2 emissions reduction of over 5.5 million BEVs. Over the next nine years, Toyota will invest $70+ billion in carbon neutral vehicles as a whole with the target to launch 3.5 million BEVs globally in 2030.

Unique Design with a Familiar SUV-Feel

For the all-new bZ4X, the engineering team looked to challenge conventions with a unique, futuristic design without losing the familiarity commonly found in SUVs. Based on the design theme “hi-tech and emotional,” the all-new, all-electric SUV is fit for a multifaceted lifestyle – offering originality that stands out in an urban cityscape coupled with SUV-like power to take on the adventurous outdoors.

Relaxation in Any Seat

The bZ4X cockpit embodies a new generation of mobility with a design that helps the driver keep their eyes on the road and their hands on the wheel. Thanks to the BEV-dedicated platform, the engineering team achieved an extra wide interior cabin that results in a spacious, quiet and relaxing space for driver and passengers alike. The cabin allows for ample legroom that’s equivalent to a large sedan for both front and rear seats as well as copious side-to-side space in the rear – further contributing to a feeling of home-like comfort.
Piano-black parts are featured throughout the vehicle, enhancing the quality feel, while a satin material is found on the higher grade to exude a feeling of luxury. A soft-touch material is also added to the dashboard to add an additional level of comfort.
For interior color options, the 2023 bZ4X is offered in Black Fabric for the L and LE grades, Softex®-trimmed +Fabric Seat in Black for the XLE grade, and options of Softex®-trimmed in Black or Softex®-trimmed in Light Gray for the XLE with Technology package.

Toyota’s all-electric SUV, bZ4X is the first to feature the latest Toyota Safety Sense safety package (TSS 3.0). This system has been enhanced by expanding the detection range of the millimeter wave radar and monocular camera. Toyota has enhanced the performance of each function and added new functions to assist in normal driving conditions. For example, the Pre-collision system has been enhanced to offer Low-Light Cyclist Detection, Daytime Motorcyclist Detection and Guardrail Detection. Also, lane recognition is enhanced to add improved functionality while in Lane Tracing Assist mode. The goal of TSS is designed to help prevent or mitigate accidents, further reduce traffic fatalities and injuries, and ease the burden on drivers.
Blind Spot Monitor and a new safety feature called Safe Exit Assist, a Toyota First, are also standard on LE grade and above. This system helps support avoidance of collisions between an open door and/or occupants who have exited and vehicles approaching from the rear. As part of the Blind Spot Monitor functionality, if the system detects an approaching vehicle and judges that there is a possibility of a collision with an opened door or passengers who have exited, an indicator in the outer mirror is lit to audibly alert the occupants. Even with the door closed, the indicator will be lit if the system judges that there is a possibility of a collision if the door is open.

Each trim level comes with a range of Toyota firsts and incredibly innovative technology inside and out. More details will be available shortly, and the bZ4X will go on sale late Spring 2022.