The Toyota Sienna Celebrates its 25th Anniversary in 2023!

Toyota has sold almost 300,000 Sienna models in Canada since its debut in 1997. With the 4th generation Sienna Debuting in 2021, we’re thrilled to announce the 25th anniversary Sienna for 2023!

From there, this celebration model adds a slew of features from the Limited grade, including the exterior mirrors with memory, auto-dimming, puddle lights, power-fold and reverse-tilt down function. Inside, the Limited also donates black leather-trimmed seating with silver stitching, including heated and ventilated front seats with memory. The Limited’s memory steering column and second-row seats with ottomans enhance onboard comfort, and illuminated door sills greet front occupants. Special “25th Anniversary” floormats treat the feet, and an exclusive black key fob cover with silver stitching features a “25th Anniversary” badge.

The History of the Sienna
As minivans entered the market and gained popularity in the eighties and nineties, Toyota first imported its rear-drive Van and then the more market-suitable Previa. Meanwhile, Toyota was preparing a much more focused entry, and it arrived for the 1998 model year: the Sienna.

The Sienna proved to be right on target for the market, and through each design generation has evolved to a state of family vehicle perfection. Here’s a look at how it got there.

First-Generation: 1998-2003
Designed expressly for the North American market, the 1998 Sienna was built at Toyota Motor Manufacturing, Kentucky, Inc. in Georgetown, Kentucky. Toyota called the first Sienna “The Camry of Minivans,” and for good reasons. Firstly, it was based on a larger version of the Camry’s front-wheel drive platform, which ensured an excellent balance of handling agility and ride comfort. Also, the Sienna was designed to give buyers the same combination of quality, user-friendly operation and value that had made the Camry so popular.

Second-Generation: 2004-2010
Customers loved the first-gen Sienna so much, they wanted more … more room, more versatility, more power and more safety. The second-gen Sienna for 2004 delivered on all counts. The chief engineer for the new model, Yuji Yokoya, and his family drove a first-gen Sienna throughout North America and met with minivan owners to gain a deeper understanding of how owners used these vehicles in daily life. Influenced by that input, the second-gen Sienna introduced for 2004 grew significantly to offer more room and versatility. It was 240 mm longer, 110 mm wider and its wheelbase increased by 130 mm compared to the first-gen model.

Third Generation: 2011-2020
The third-generation Sienna introduced for the 2011 model year ushered in a bolder design, along with a growing roster of luxury and tech features. The design emerged from Toyota’s CALTY studios, with engineering handled by Toyota Technical Centre in Ann Arbor, Michigan, as well as in Japan. Sized the same as the second-gen Sienna, the new model added versatility.
A new 2.7-litre four-cylinder engine became available on lower trims but was discontinued after 2013. The 3.5-litre V6 continued and was paired with a new six-speed automatic transmission. For 2018, power jumped to 296 horsepower with the addition of Toyota’s D-4S direct fuel injection, and an eight-speed automatic replaced the six-speed. Thanks to this powertrain, the NRCan-estimated combined fuel consumption was rated at 10.8 L/100 km for the front-wheel drive model.

Fourth Generation: 2021-
Toyota reimagined the fourth-generation Sienna to support a wider array of life stages and activities than the typical minivan. That included answering the call for more luxury, multimedia and outdoors-amenable features.

Built around an all-new minivan structure based on Toyota’s versatile TNGA-K Platform architecture, its evocative design was influenced by the bold and robust character of SUVs.
The Sienna delivers a confident, agile driving experience with exemplary ride comfort, thanks in large part to the TNGA-K Platform combined with a trailing-arm multi-link rear suspension. The sporty XSE and lavish Platinum grades fill their wheel wells with standard 20-inch aluminum clad wheels with P235/50R20 tires for FWD. (All-Wheel Drive versions have 18-inch wheels.)

The Sienna LE and some XLE models come equipped in 8-seat configurations with a stowable middle seat. The Super-Long Slide second-row captain’s chairs in some 7-seat models slide 635 mm, providing unprecedented legroom and flexibility to maximize comfort, especially when used with the available ottoman feature.

Cutting-edge visibility tech and the available Bird’s Eye View Camera with Perimeter Scan provides a live, 360-degree view to help the driver see potential obstacles.
The 2023 Sienna offers a smorgasbord of connectivity and entertainment, with versatile Toyota Audio systems providing something for everyone. The base Toyota Audio system in the LE grade is jam-packed with features, including a 9-in. touchscreen, six speakers, Android Auto™ and Apple CarPlay® compatibility, seven USB media ports, hands-free phone capability and music streaming via Bluetooth® wireless technology.

Pricing for the 2023 Sienna will be announced later this summer and models will be available at Toyota dealerships later this year. 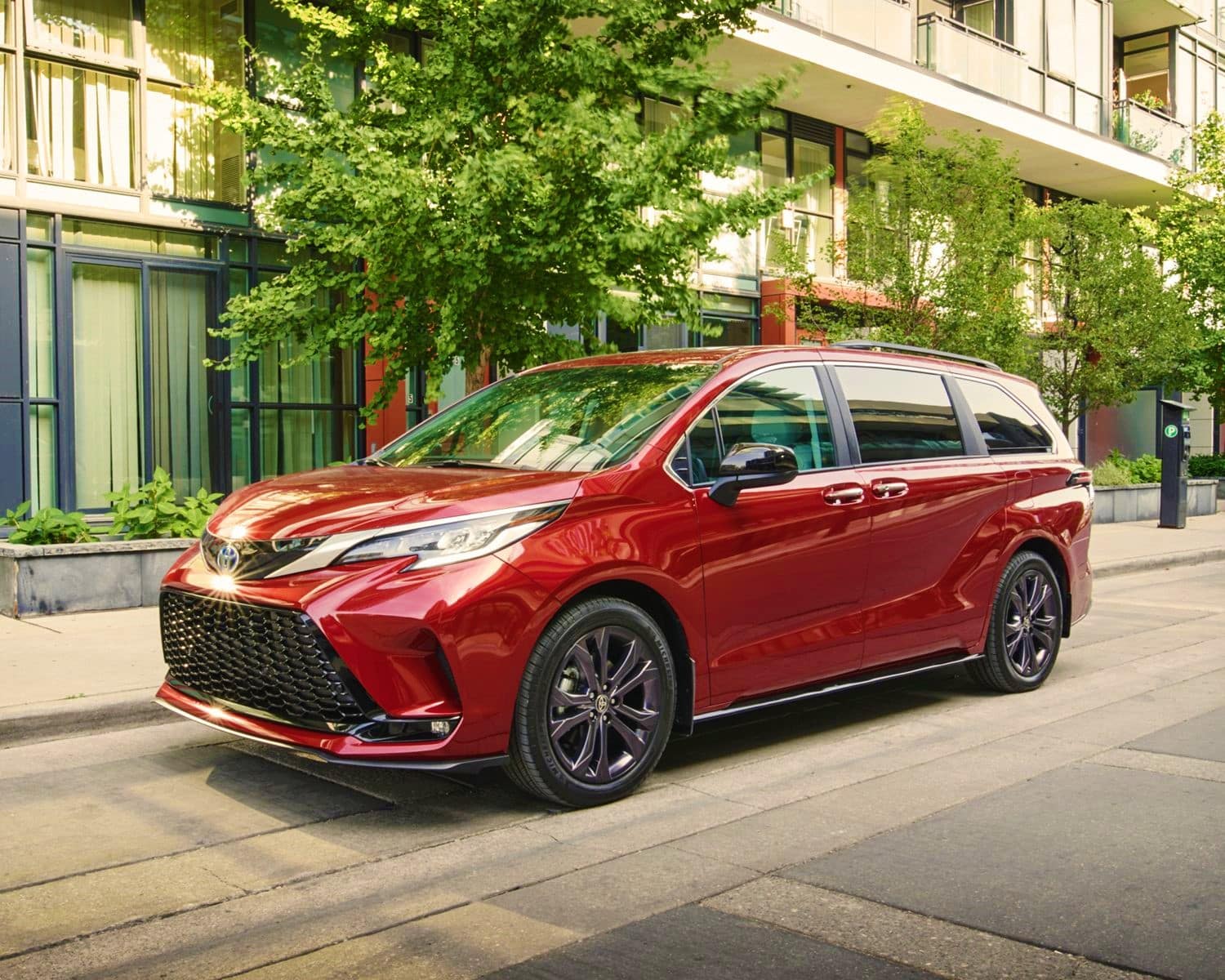