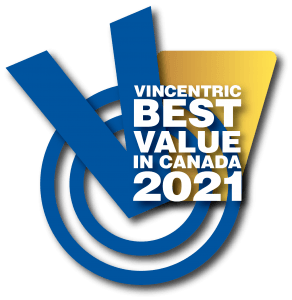 TORONTO, Ontario – MAY 20, 2021 – Toyota Canada Inc. (TCI) was honoured today with fifteen 2021 Vincentric Best Value in Canada Awards™, more than any other auto manufacturer for the seventh consecutive year.

Vehicles recognized with Vincentric Best Value in Canada Awards™ are compared against competitors in the same segments and are awarded for having lower than expected ownership costs.

Toyota was honoured with the Best Value in Canada brand award in the “Passenger Car” and “SUV, Crossover and Van” categories, as well as six model level awards in the “Large Sedan”, “Hybrid”, “Large SUV/Crossover”, “Hybrid SUV/Crossover”, “Minivan” and “Small/Mid-Size Pickup” segments.

“We’re proud that our Toyota and Lexus vehicles have received the most Vincentric Best Value in Canada Awards™ for the seventh consecutive year,” said Cyril Dimitris, Vice President, Sales and Marketing at Toyota Canada Inc. “These awards illustrate our commitment to delivering vehicles with excellent value to our customers and guests, year after year.”

Using a statistical model addressing different scenarios, Vincentric identified the winners by measuring which vehicles had lower than expected costs given their market segment and price. Each vehicle was evaluated in all 10 provinces plus the Northwest Territories using a range of annual kilometre intervals and insurance profiles.

As part of the awards process, Vincentric also identified the following seven models as having the lowest total cost of ownership in their class:

Toyota Canada Inc. (TCI) is the exclusive Canadian distributor of Toyota and Lexus vehicles. Toyota has sold over six million vehicles in Canada through a national network of 286 Toyota and Lexus dealerships. Toyota is dedicated to bringing safety, quality, dependability and reliability to the vehicles Canadians drive and the service they receive. TCI’s head office is inToronto, with regional offices in Vancouver, Calgary, Montreal and Halifax, and parts distribution centres in Clarington and Vancouver. Toyota also operates two manufacturing facilities in Canada. Having produced more than nine million vehicles, popular Canadian models built at these facilities include Toyota RAV4, Toyota RAV4 Hybrid, Lexus RX 350 and RX 450h hybrid. Recent investments at its facilities in Ontario will allow for increased production of the top-selling Toyota RAV4 and RAV4 Hybrid models for the North American market.